Modern electronic products have increased efficiency, lightweight, and high speed. Therefore, each manufacturing step should also embrace such traits and that includes the manufacturing of PCBs. Soldering like wave soldering and reflow soldering play an important role in determining the performance of an electronic product, it is high-speed and accurate, which meets the demands of cost-effectiveness and mass production.

We use wave soldering for combining PCB and electronic components through a liquid wave. The liquid is actually dissolved tin and the wave is formed via motor agitation. We use a wave soldering machine for this purpose.

Transistor was invented in 1946 by John Bardeen, Walter Brattain, and William Shockley at Bell Laboratories. This reduced the size of the electronic components. Some years later, lamination and etching were developed and this paved the way for a soldering technique that we could use at the production level.

Electronic components were mostly through-hole and it becomes impractical to solder them individually by using a soldering gun. There was a need for applying solder to the entire board at once. Hence wave soldering was developed which allowed for running over the entire board with a wave of solder paste.

Wave soldering involves four steps and we will look at them one by one.

• Eliminating oxides from the metal surfaces of component pins and boards.

• Stopping secondary oxidation of circuit boards during the thermal process.

• Proper transmitting of the required heat.

PCBs travel through a heat tunnel in a pallet along a chain which is similar to a conveyor belt. It is necessary for activating the flux and carrying out pre-heating.

When the temperature continues to rise, solder paste melts to become liquid. This results in a wave of solder which travels throughout the board and allows components to solidly bond with the board.

If we perform wave soldering at low temperatures then the flux won’t melt and hence it will not activate. It will lose its ability to react and dissolve dirt & oxides on the metal surface. We also need to consider other parameters such as wave contact time, and speed of band carrier, etc. 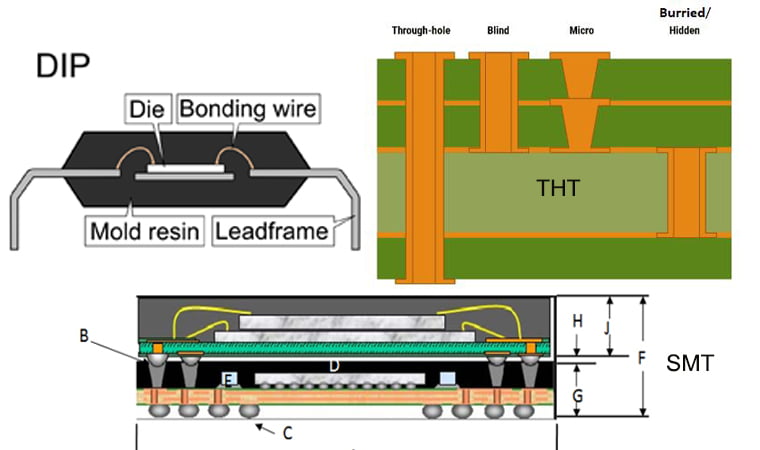 We use wave soldering in DIP (Dual Inline Packaging), SMT (Surface Mount Technology), and THT (Through Hole Technology). However, we mostly use it in SMT.

As mentioned earlier, electrical components are temporarily attached to the contact pads before the soldering actually commences. This includes two steps. In the first step, solder paste is precisely applied to each pad via a solder paste stencil. In the second step, we use to pick and place machines for placing the components on the pads. Actual reflow soldering doesn’t start until the completion of these preparations.

The actual soldering process has four steps which we are about to discuss.

Pre-heating is very important if you want to manufacture premium quality PCBs. It has two major purposes during reflow soldering.

Reflow soldering also depends on the flux which is contained in the solder paste. Hence, the temperature has to rise significantly so that the flux may activate. Otherwise, the flux won’t play an active role in the reflow soldering process.

For instance, BGAs have a lot of solder balls that melt during the reflow soldering. If we don’t achieve the optimal soldering temperature than these balls may melt unevenly and BGAs may suffer from rework.

When we achieve the peak temperature, the temperature curve will start falling. Cooling leads to solidification of the solder paste and parts are permanently fixed to their contact pads on the board.

We can never ignore the difference between reflow soldering and wave soldering because it is important when you are selecting the PCBA services. A soldering modification tends to make drastic changes in the entire assembly manufacturing process. These include manufacturing cost, time to market, efficiency, and gains, etc.

Generally, wave soldering works best for DIP and THT while reflow soldering is ideal for SMT assemblies. However, a circuit board rarely contains only through-hole components or surface mounted devices. That is why we often have to use a mixture of SMT, THT, and DIP. When it comes to mixed assemblies, we first carry out SMT and then focus on DIP or THT. This is because the temperature of reflow soldering is much higher than the one in wave soldering. If we don’t follow this sequence then the solder paste might melt again. This can lead to well-soldered components to fall from the board or suffer from defects.

We use wave soldering mainly for mass production. It helps in manufacturing a large number of printed circuit boards in a relatively small amount of time.

On the other hand, we use reflow soldering when we have to manufacture a small number of printed circuit boards. We avail of this technique when we don’t have very tight time constraints.

MOKO Smart is the best smart device solution you can ever come across. We have a large manufacturing setup for making PCBs which has the capacity to perform both the wave soldering and reflow soldering. On top of that, we have a large production capacity so we can easily perform any mix of soldering techniques for bulk orders. If you are looking for a reliable resource for performing soldering on your PCBs then feel free to contact us. We are hoping to hear from you soon!