Surface mount technology is a component assembly technology related to printed circuit boards. It differs from other PWB methods where the component leads are inserted into plated through-holes and wave-soldered from the bottom to fill in the holes and interconnect the components. It can achieve higher packaging densities, higher reliability, and reduced cost than the plated through-hole insertion process. Currently, surface-mount technology is the process most widely used for low-cost, high-production consumer electronic assemblies. Instead of putting wire leads into holes drilled in the circuit board.components and elements are mounted directly onto the surface of the board in Surface mount technology.

Difference between the through-hole process and surface mount technology

When designing a printed circuit board (PCB), one of the first decisions to make is to select the type and style of components to be used. For common component types, such as resistors, capacitors, and diodes, you can usually choose from a variety of available configurations and footprint. The component types selected will influence the size and appearance of the finished printed circuit board assembly (PCBA).

In the past, components with long leads were usually inserted manually into the plated through-hole on the PCB. The leads would then be soldered to form permanent interconnections with the holes. This was known as a through-hole assembly. Increasingly, designers prefer to use a more modern (though by now fully mature) assembly method, which utilizes components whose leads attach to the PCB surface only, without the need for a mating hole. This method was first known as “flat mounting” and later became widely known as surface mounting technology. There are some points that make Surface-mount technology different from Through Hole, which has been briefly listed below;

The two acronyms are often confused in electronics manufacturing services. In the paper. They differ by only one letter, but in practice, more SMT and SMD are separate. SMT is the process, and SMD is an abbreviation for surface mount devices, which is one of the components of surface mount technology. Including chips.The SOP.SOJ PLCC.LCCC.OFP, BGA, CSP, FCMCM and so on.

Surface-mounted equipment (SMD) is a small part attached to a board in electronics manufacturing. They are designed to be smaller than previous components in response to market demand for smaller, faster and cheaper electronics. Previous components were not only larger but required a different, slower application process. Whereas previous versions of the component had wires running through the circuit board, the pins used in SMD were welded to the circuit board. This means more efficient use of the board space, as there is no need to make holes and both sides of the board become available space.SMDs was created to use efficient and accurate surface mount technology, or surface mount technology 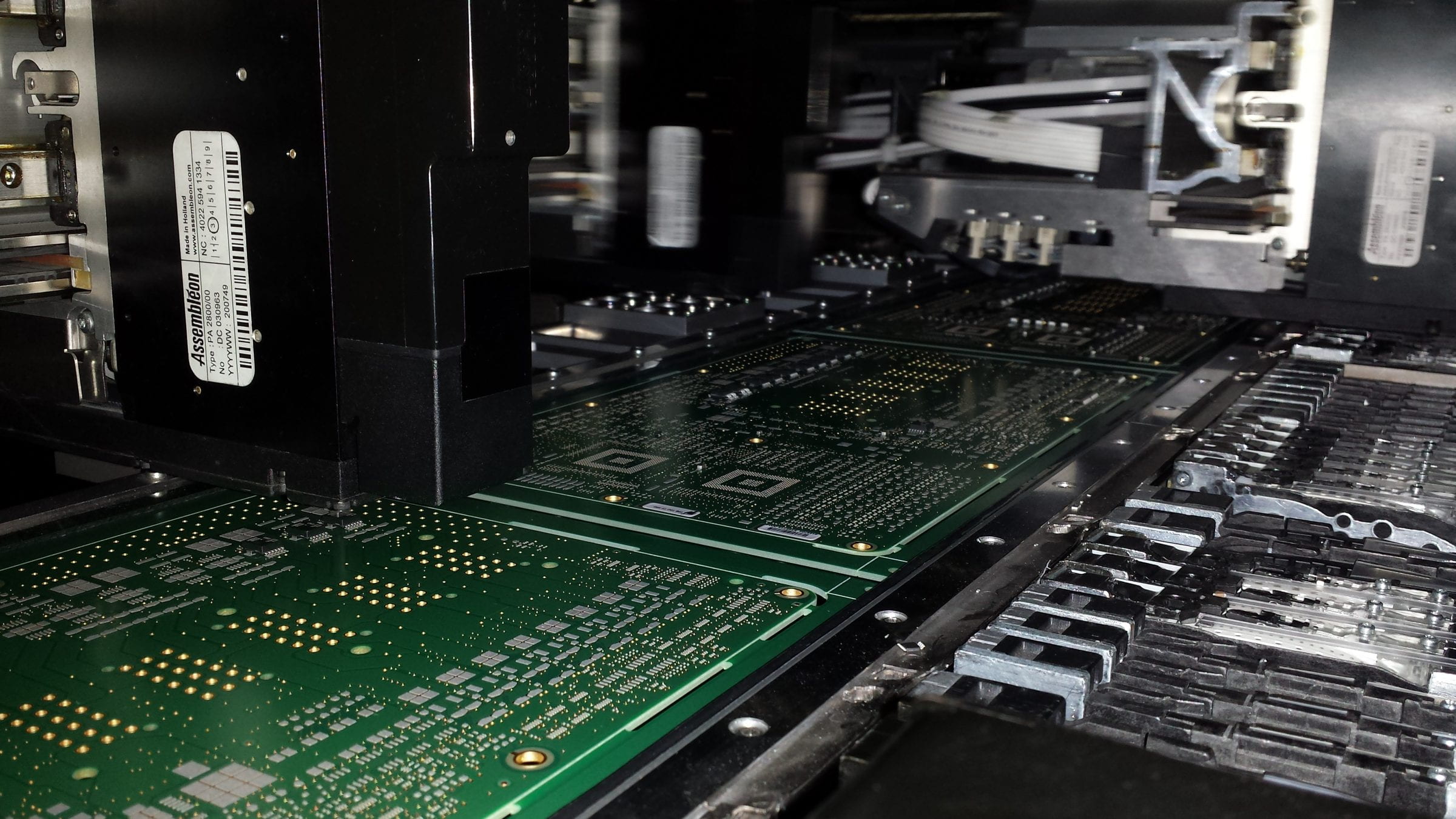 Surface mount components are smaller and generally provide better performance levels, and they can be used with automatic pick and place machines, eliminating in many cases the need for manual intervention during assembly. Wire components are also difficult to place automatically because wires need to be pre-formed to fit the relevant hole spacing, and even then they are prone to problems when placed.

During PCB assembly, most components on the circuit board are automatically placed. Occasionally, some may require manual intervention, but it has been diminishing. Traditionally, some connectors and other components require auxiliary placement, but the level of6 manual placement has been declining.

Today, printed circuit boards are often developed to minimize this situation or even change the design to use components that can be placed automatically. In addition, component manufacturers have developed a number of specialized surface-mounted versions of components that allow almost complete automated assembly of most circuit boards. Printed circuit boards (PCBs) for surface mount technology (SMT) need to be selected wisely based on factors such as CTE(coefficient of thermal expansion), cost, dielectric performance, and TGA. When designing a surface mount board (PCB), the choice of PCB material is essentially dependent on the type of SMD element used.

In the industry. It largely replaced the construction method of through-hole technology, that is, the circuit board with wire components into the hole.

Surface mount technology assembled components not only the compact structure but also high safety density. When PCB is pasted on both sides, the assembly density can reach 5-5-20 solder joints per square centimeter. SMT PCB can realize high-speed signal transmission due to short circuits and small delays. Meanwhile, SMT assembled PCBs are more resistant to vibration and impact. It is of great significance to realize the ultra-high-speed operation of electronic equipment.

Because the element has no leads or the leads are short. The distribution parameters of the circuit are reduced and the rf interference is reduced.

The standardization, serialization, and consistency of the welding conditions of chip components enable the surface mount technology to be highly automated. The failure of components during welding is greatly reduced and the reliability is improved.

When installed on the PCB board, there is no need to bend, shape or shorten the lead wire of the components, which shortens the whole process and improves the production efficiency. The processing cost of the same functional circuit is lower than that of the through-hole interpolation, which can generally reduce the total production cost by 30%-50%.

• It does not guarantee that the solder joint will withstand the compounds used in the potting process. Connections may or may not be broken when thermal cycling is performed.

• Components that generate large amounts of heat or bear high loads should not be surface-mounted because solder melts at high temperatures.

• Solder also weakens due to mechanical stress. This means that components that will interact directly with the user should be wired using the physical binding installed through the hole. 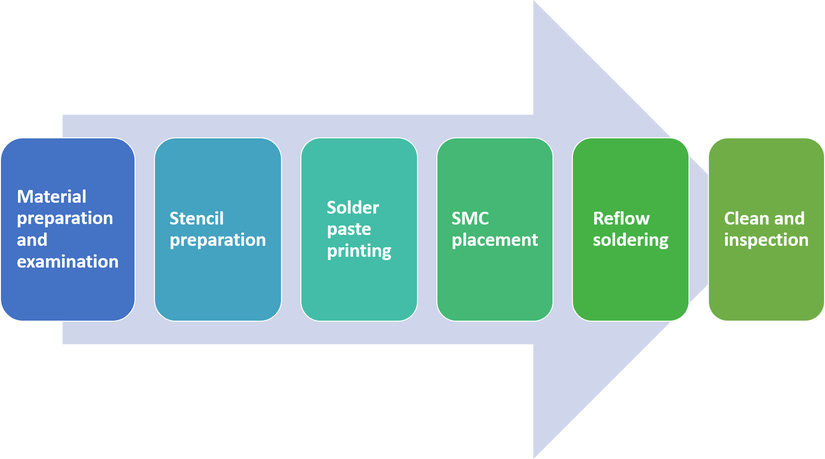 The steel mesh is used for a fixed position in solder paste printing. It is manufactured according to the design position of the pad on the PCB.

The first machine to be installed during manufacturing is the solder paste printer, which is designed to apply the solder paste to the appropriate solder pad on the PCB using a template and scraper. This is the most widely used method of applying solder paste but spray printing is becoming increasingly popular, especially in sub-contract departments where no template is required and modification is easier to make solder paste, usually flux and a mixture of tin, used to connect SMC and PCB solder pads. It is suitable for PCB and dies using a scraper at 45°-60° Angle solder paste detection.

Most solder paste presses have the option to include automatic detection, but depending on the size of the PCB, this process can be time-consuming, so you can usually choose a separate machine. The internal detection system of the solder paste printer USES 2D technology, while the dedicated SP [machine USES 3D technology for more thorough detection, including the solder paste volume of each pad, not just the print area.

Once the PCB has been confirmed to have the correct number of solder applications, it moves to the next part of the manufacturing process, that is, the placement of the components. Each component is removed from the package with a vacuum or clamping nozzle, checked by the visual system, and placed at a high speed in a programmed position.

One of the many challenges subcontractors face is first assembly or first piece inspection (FAI) to verify customer information, which can be time-consuming. This is a very important step in the process because of any error, if undetected, can result in a lot of rework.

Once all the component positions have been checked, the PCB assembly is transferred to the reflow welder where, by heating the assembly to a sufficient temperature, all the electric welding connections are formed between the component and the PCB. This seems to be one of the less complicated parts of the assembly process, but the correct reflux profile is key to ensuring acceptable solder joints that do not overheat and damage the parts or assembly.

Clean the board after welding and check for defects. Rework or repair defects and store products. Common SMT related equipment includes magnifying lens, old master (automatic optical inspection), flying needle tester, X-ray machine and other optical inspection machines that can be connected to the machine position so that the component position can be adjusted and SPI machines that can be connected to the printer to allow adjustment of PCB alignment templates.

Solutions to surface mount defects include:

• Increase the preheating temperature (in accordance with the recommended guidelines) so that the temperature difference between the terminals is small during reflux.
• Select components and PCB boards with consistent solderable leads and pads.
• The height of solder paste deposition is measured by the visual system to ensure the same height of solder paste deposition between solder pads.
• Inefficient viscous forces are avoided by avoiding extreme environmental conditions
• Minimize the amount of movement the assembly sees during reflow.
• Increase assembly placement forces to ensure contact between assembly terminals and solder paste deposits (not too much, as a bridge may occur if it is too high).

MOKO Technology is professional in manufacturing PCB and PCB assembly, with 8 SMT lines, we can assemble 10 million chips per day.